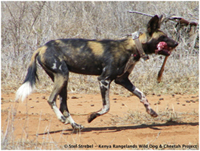 African wild dogs were extirpated from most of Laikipia in the 1980s, but have recolonised the area successfully, and now number about 30 packs (approximately 300 individuals). This means that Laikipia-Samburu is home to the largest population of wild dogs resident within Kenya, and the sixth largest wild dog population in the world! The largest populations are in southern Africa and Tanzania.

Large, wildlife-friendly and interconnected spaces are crucial for the conservation of wild dogs, which, like cheetahs, are a very wide-ranging species – their home ranges can reach over 1500 km². This means that the main threat they face is habitat loss and fragmentation, which increases their contact with people and domestic animals, resulting in human-wildlife conflict and transmission of disease. Due to factors like human population expansion, land use change, habitat fragmentation, and disease, wild dogs currently inhabit less than 7% of their historical range in Africa, and number less than 7,000 individuals. 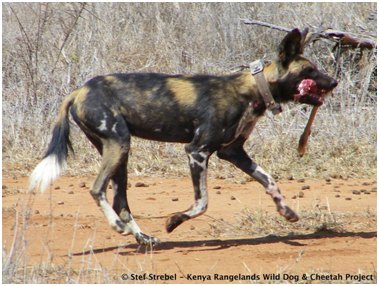 Wild dogs are often seen in LHCL, and several wild dogs dispersing from packs in central Laikipia County have crossed LHCL as they search for other wild dogs and new territory – one wild dog from Mpala Ranch even travelled through the LHCL to reach the slopes of Mt. Kenya, where he eventually settled down! Recently, a dispersal group of 5 young females crossed the LHCL several times while searching for potential mates and new territory (see map 1). They joined forces with a young male in late 2014 to become the Truants Pack and have now been spending a lot of time on Pyramid and northern Lolldaiga Hills Ranch (see map 2)!  Helen O’Neill, the PhD student on the project, is using data like these to study in-depth the landscape features that influence the movement patterns of wild dogs and cheetah in Laikipia. 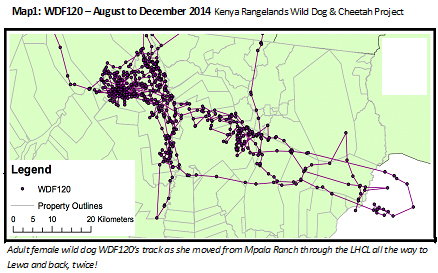 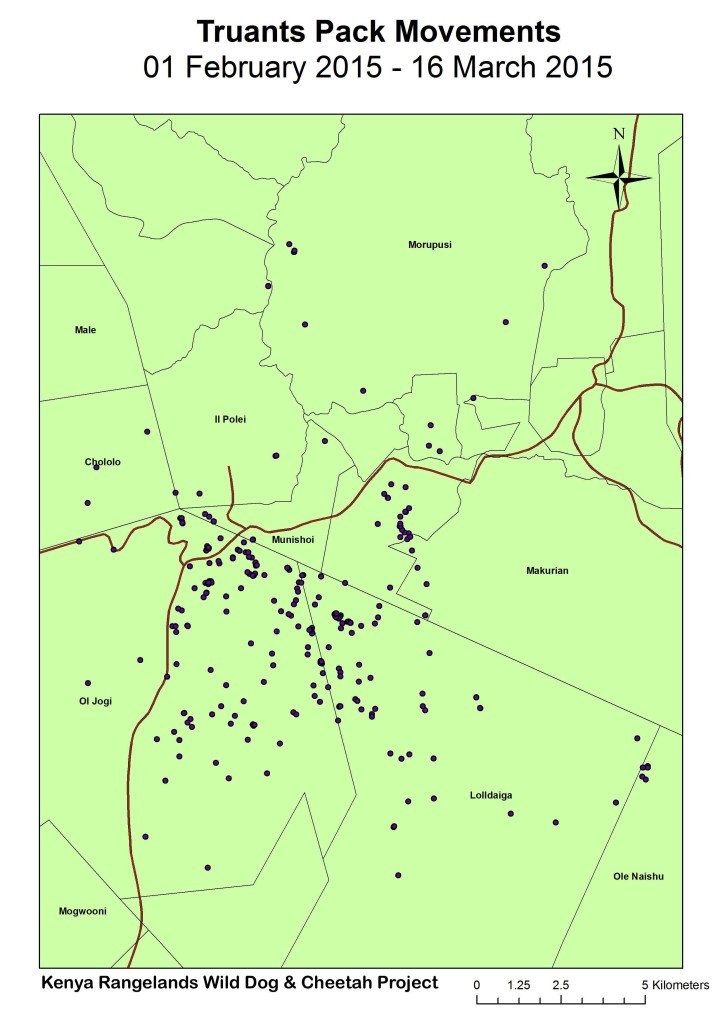 In addition to the Truants pack and several wild dogs passing through, the LHCL is also currently utilized by two resident wild dog packs. Valley Pack is named after Valley Dam on Lolldaiga Hills Ranch, where they were often seen in 2014. In July and August 2013 they were photographed several times on Ol Jogi Ranch, before being spotted on Lolldaiga Hills Ranch in December 2013. By May 2014, the pack had 8 young pups, and numbered 20 individuals. Subsequently, the Valley Pack was on Enasoit Ranch and neighbouring communities, before being picked up by camera traps on Borana Ranch in early August 2014!  Since then, they were spotted with pups in December 2014 by Enasoit, and this February, thanks to photos taken on Borana by Michael Dyer, we obtained positive IDs of the Valley Pack’s alpha pair and several yearlings! 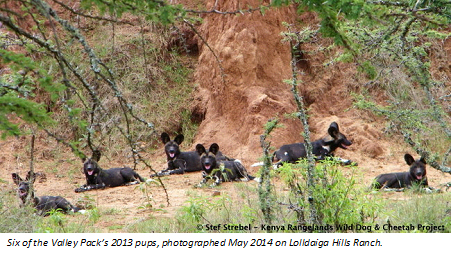 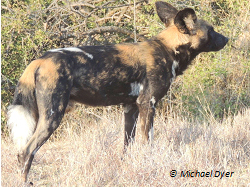 The other wild dog pack on LHCL is the Njururi Pack – “Njururi” means “wanderer” in Kikuyu. They have mainly been seen on Borana, but reports of 6-7 dogs on Lolldaiga Hills Ranch suggests they also use this area. The pack consists of 3 adult females and 3 adult males. They were photographed at Borana once in 2013 and twice in 2014. Thanks to photos by Jamie Gaymer, we know that one of the males in Njururi Pack was originally photographed as a young male on Ol Jogi Ranch in 2011!

Along with sighting reports, photos sent to the project are invaluable in helping us to piece together a better understanding of wild dog ranges and population dynamics in Laikipia and surrounding counties. Sighting reports and photos are added to our database and, where possible, matched to a study pack – this enables us to keep track of uncollared packs and dispersal groups, as well as to identify new packs.

If you would like to share your photos and information about any sightings, send us an email at wilddogcheetahproject@gmail.com! We’ll do our best to ID the dogs and/or cheetahs, and then send to you information about the animals you saw and what their story is!

You can keep up with our latest news by following us on facebook (www.facebook.com/WildDogCheetah) and twitter (@wilddogcheetah)!