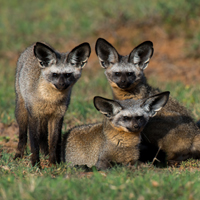 Written by Yvonne de Jong on March 4, 2016. Posted in All News, Biodiversity, Blogs

It is 5:30 am and I have just gotten in my car and put the heater on against the cold equatorial night air. I’m heading out from my home on the Burguret River towards Nanyuki, where I am meeting with Paul Benson, a professional wildlife photographer. Paul is an expert with DSLR camera traps, and today he will be my host. He will take me to Lolldaiga Hills Ranch to show me the process of setting up a camera trap. The subject matter is a species that happens to be Paul’s favorite, and one I know very little about-the bat-eared fox (Otocyon megalotis). 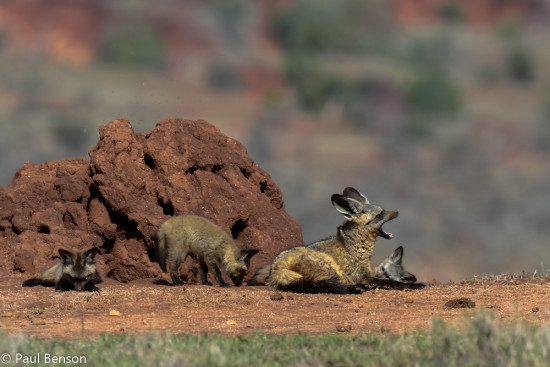 Paul and I meet at the Nanyuki Sports Club and are quickly on our way. By 6:45 am we have entered the ranch, and are immediately greeted by a number of solitary animals. An African buffalo (Syncerus caffer) crosses our path, heading south in a hurry. A giraffe (Giraffa camelopardalis) glides across the road. So does a black-backed jackal (Canis mesomelas), the fur on its muzzle lit up by the rising sun. Then we see a small family of savannah elephants (Loxodonta africana) moving quickly, as if they are hurrying away from something. The light in the hills is hazy and diffused, and the air is warming up.

As we drive, Paul points out interesting features in the landscape, while telling me about himself and his work. Born in Britain, Paul moved to Kenya in 1998 after a full career in the British army. Though he has always had a passion for photography, he did not begin to pursue it as a full-time occupation until 2005. Paul is based in Laikipia County, and uses the Lolldaiga Hills Ranch as his primary site for photography. Through his photographs and observations, he helps the Lolldaiga Hills Research Programme document the species of plants and animals that occur on the ranch. 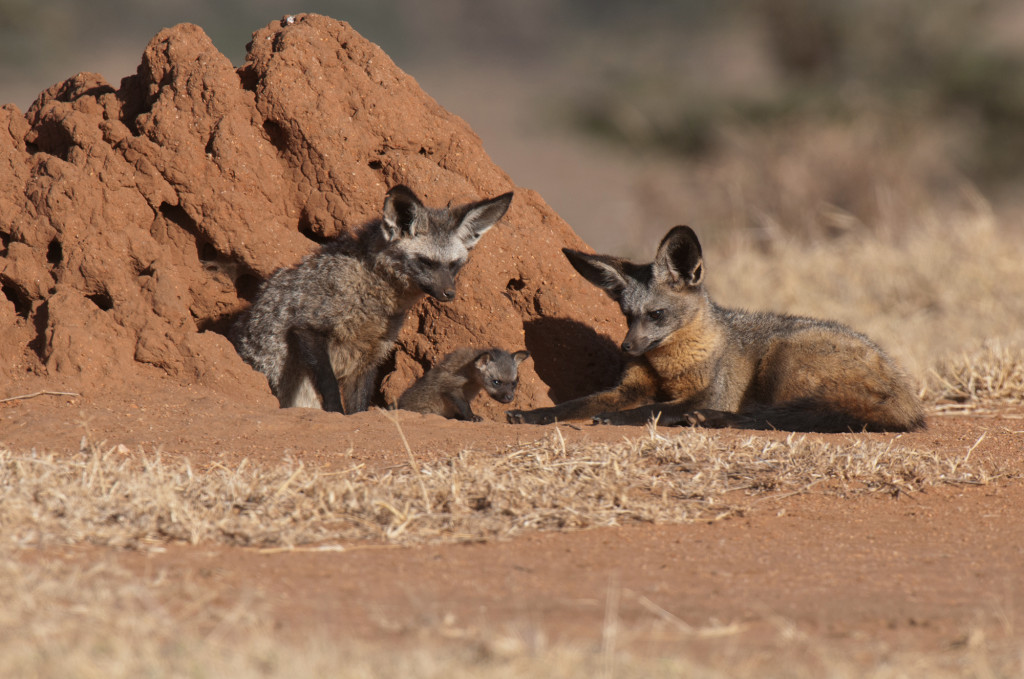 When I ask Paul why bat-eared foxes are his favorite species, he replies that he is drawn to unusual animals that are somewhat shy and retiring. Because bat-eared foxes are difficult to locate, they are relatively underexposed in the wildlife photography world. Unlike the big cats, which are arguably over-photographed, bat-eared foxes are not, and it is this paucity which appeals to him.

Bat-eared foxes are endemic to Africa. Two subspecies are recognized, one in southern Africa (O. m. megalotis) and one in eastern Africa and the Horn of Africa (O. m. virgatus). The two subspecies are separated by about 1000 km. Bat-eared foxes prefer open grasslands, especially short-grass areas with bare patches. Their range overlaps almost completely with those of two genera of termites (Hodotermes and Microhodotermes) that are common in their diet. Paul points out that bat-eared foxes in eastern Africa are almost exclusively insectivores, a fact that surprises me, having assumed that most canids hunt and eat other mammals and birds. As well as termites, their diet also includes beetles and ants. Their unusually large ears are the perfect honing devices for locating their prey underground, as are their noses. They hunt by walking slowly with their muzzles close to the ground and their bat-like ears cocked forward, sniffing and listening carefully. 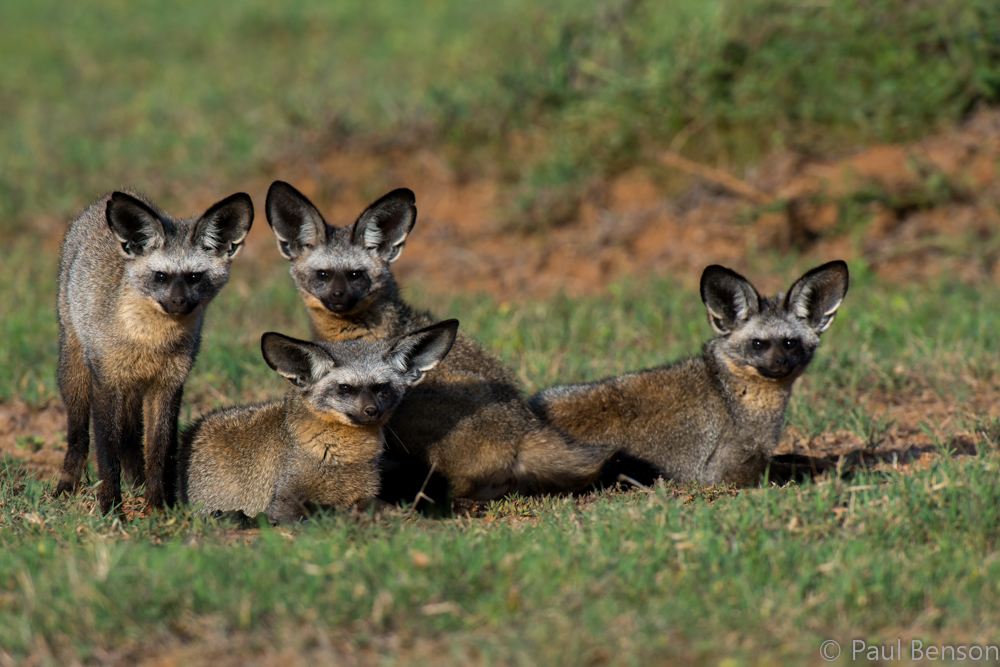 Bat-eared foxes are most common on the short grass plains of northern Lolldaiga Hills Ranch, were the abundance of termite mounds is highest. Groups of up to seven individuals occupy about 25% of the Ranch over an altitudinal range of 1700 to 1900 m above sea level. Paul has been photographing on Lolldaiga Hills Ranch for 3 years. He has the main denning sites for bat-eared fox on Lolldaiga and has collected a large amount of natural history data on the species. In 2014, he found four breeding pairs on the ranch. In 2015, Paul and the Lolldaiga Hills Research Programme estimated that there were between 25 and 35 bat-eared fox on the Ranch (for more information click here or go to the full report De Jong et al. 2015). 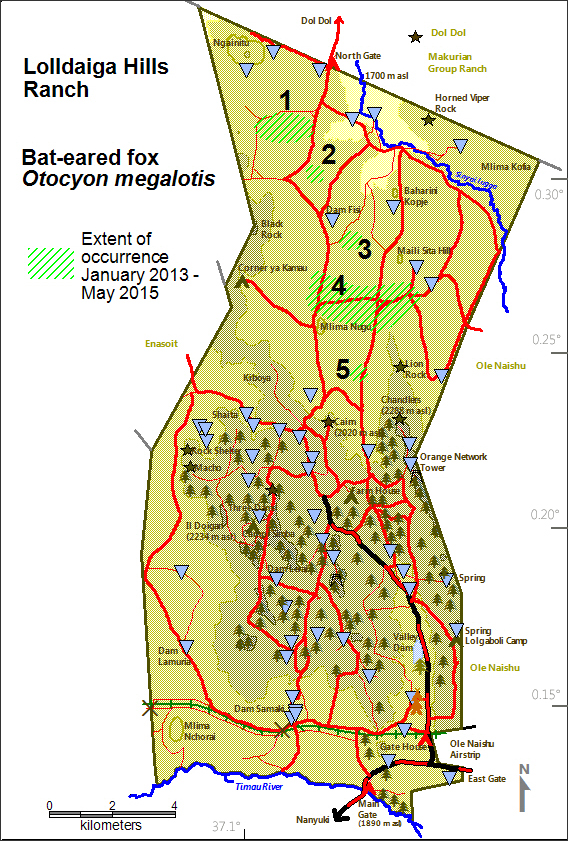 It is not long before we spot our first pair of foxes, singled out by their magnificent ears, which are laid flat against their heads in order to be inconspicuous. I am awarded only a glimpse of their beauty when the shy pair dash away; they are small (adults weigh 3-4 kg) and slightly built creatures with slender legs. They have short, sharp muzzles and bushy tails. A whitish band extends across their foreheads to below and up the frontal rim of their ears. Their eyes are round, dark and shiny. They are fast, and now remain hidden in the bush about 100 meters away. Paul insists they will be watching us hidden nearby for a while, as it is likely they have cubs in their den. It is about 7 am, and the “second sunrise” (when the sun’s rays break over the rim of the hills) has not quite reached us, so Paul opts for looking for another den.

It is only 10 minutes later that we reach a second den site, in a clearing along a ridge, littered with termite mounds. By this time the true sunrise has reached us and the light is clear and sharp. While he explains that this is the location of a “commune” (a family group rather than a monogamous pair) three adult foxes dash out of the opening. Like the first pair, they dart away. He laughs, having not expected this, and we drive about 25 metres away to so as to not stress them. 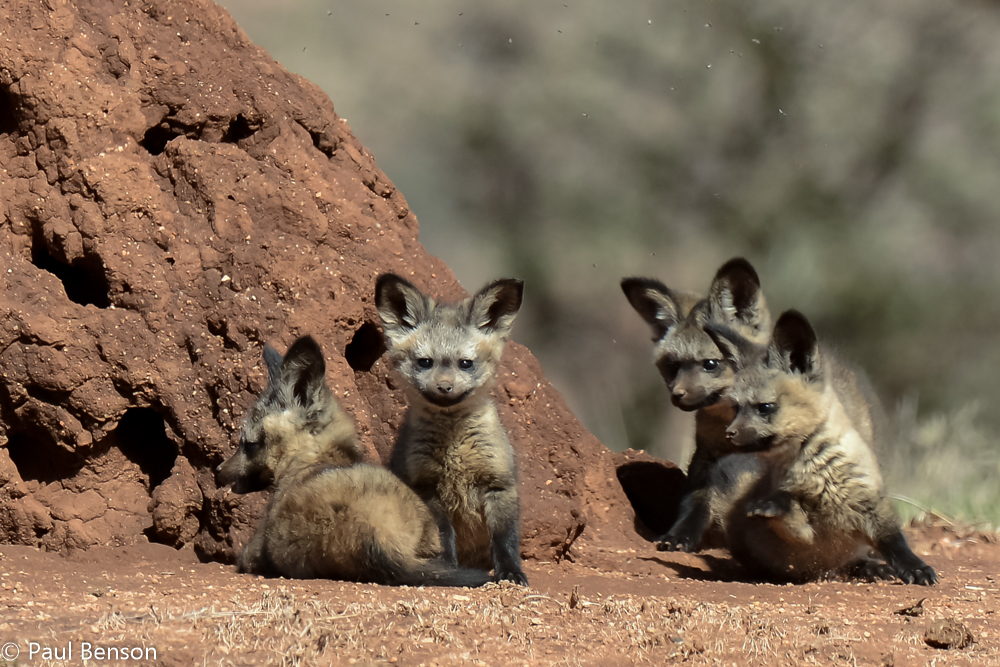 Paul chooses to set his camera trap up at this location as he wants to learn how many foxes currently occupy the den and, perhaps, to obtain some excellent photographs. It doesn’t take long because he has all his equipment carefully organized in the back of his vehicle. As he works, he explains that there are several types of camera trap systems. One type is fully automatic and widely used on the ranch to monitor biodiversity over long periods. Paul prefers a more sophisticated (and much more expensive) type that is attached to a professional camera. He says that one advantage to using camera traps is that they provide much more intimate, ground-level images of a species. When questioned about whether camera-trap photography is “cheating”, he emphatically points out that it requires just as much, if not more, knowledge of the species’ natural history in order to obtain camera trap photographs, and that you still have to be out in the field setting up as would a traditional photographer. He explains that it requires huge commitment and hard work to capture great images via camera traps. Much patience and persistence are needed, and one must locate the chosen species, which demands intimate local knowledge and 4-5 hour daily searches. I am impressed. Paul certainly knows where to find them. 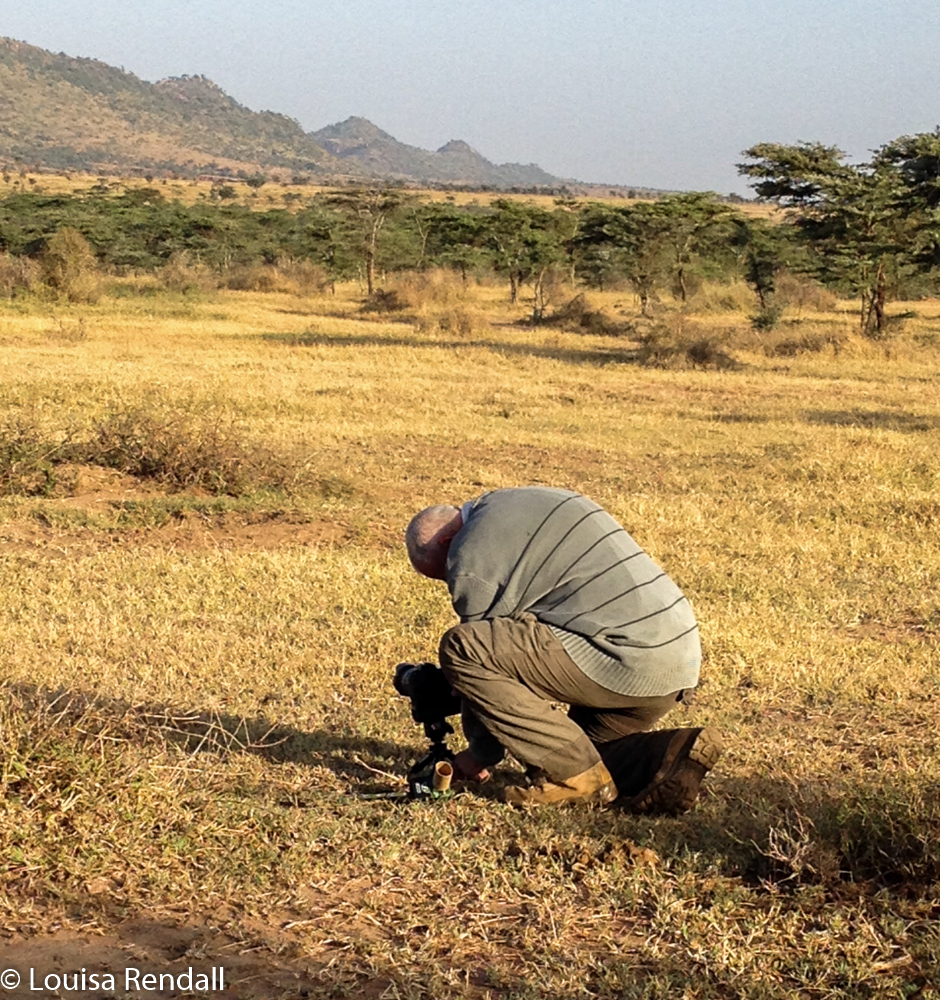 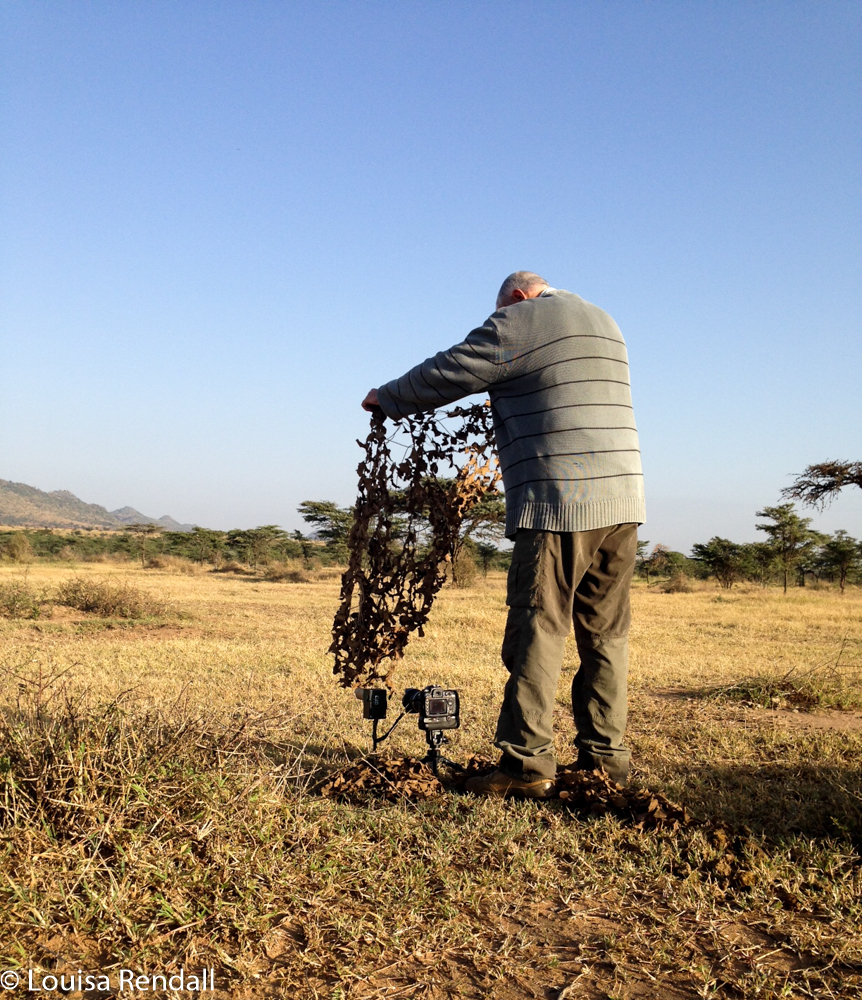 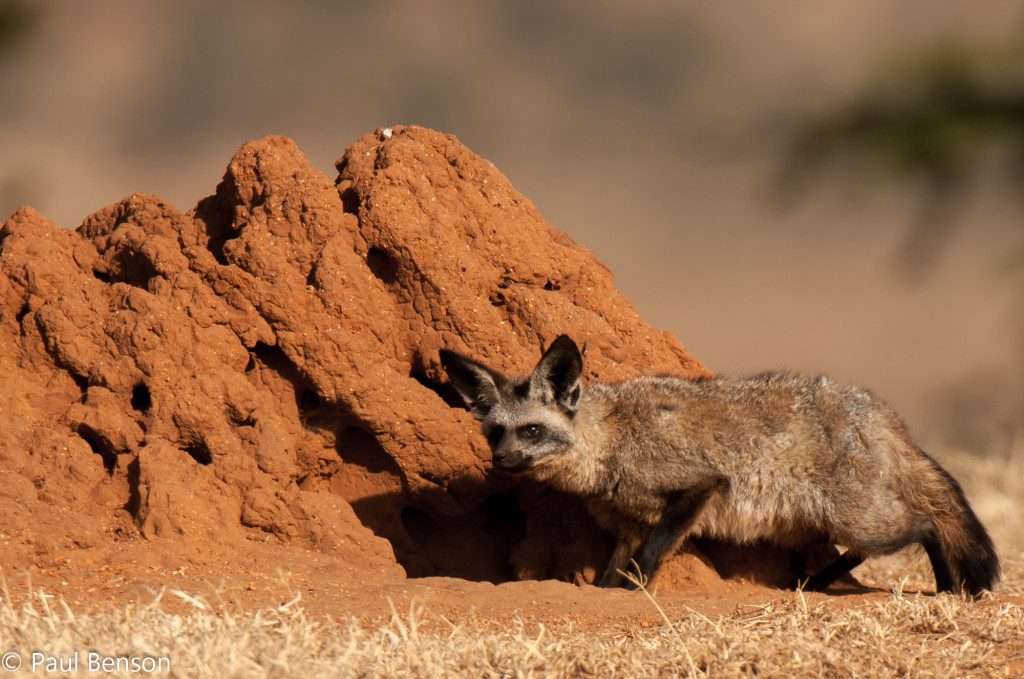 Now that the trap is in place (a simple set-up on a spike tripod 15 meters from the den) we go searching for more bat-eared foxes. Sadly we do not see any, but still are able to enjoy the peace and space of the Lolldaiga Hills. We encounter many species of antelope and birds as we slowly meander through the landscape. I feel fortunate to be along for the ride. Paul’s knowledge of the flora and fauna of the region is extensive. When we return to the site some hours later, there is a reward waiting for us: two images a single fox on its return to the den. Definitely worth the wait! I can see why Paul loves his work. At the end of our morning, as we drive back down the hills towards Nanyuki, a phrase of Paul’s sticks with me; There’s a whole world out there, even down to the insects. Indeed there is. 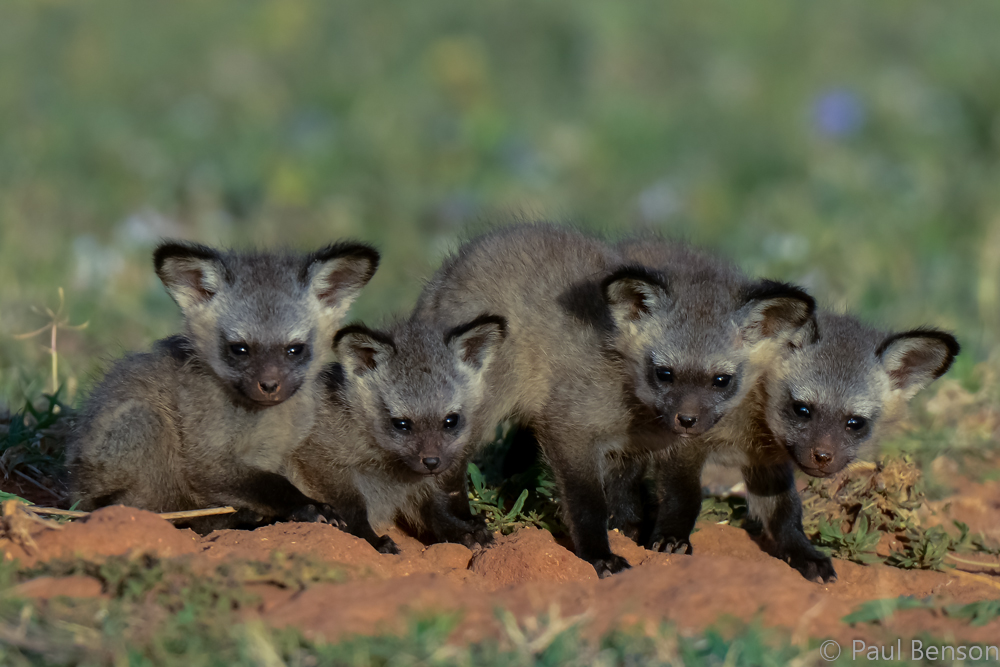