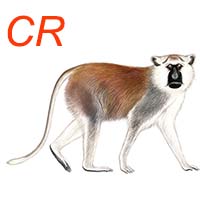 Is the Southern Patas Monkey Africa’s Next Primate Extinction?

Written by Yvonne de Jong on September 4, 2021. Posted in All News, News, Uncategorized

The charismatic, semi-terrestrial, southern patas monkey Erythrocebus baumstarki, is probably now restricted in the protected savannas of the western Serengeti (central northern Tanzania). It seems that, at present, fewer than 200 individuals occupy about 15% (9,700 km²) of their early 20th century geographic range. This large, slender, long-limbed, primate once occurred in the acacia woodlands near Mount Kilimanjaro and in southern Kenya but was extirpated from these areas prior to 2016 due to factors related to the rapidly increasing human population. The main threats are the degradation, loss, and fragmentation of natural habitats, and competition with people and livestock for habitat and water. Poaching and domestic dogs are also threats. As a result, this shy and secretive monkey is listed as ‘Critically Endangered’ on the IUCN Red List of Threatened Species [Website:  https://www.iucnredlist.org/species/92252436/92252442].

In the absence of focused conservation actions, it appears that the southern patas monkey will be among the first three primate extinctions recorded for continental Africa during the past century. Miss Waldron’s red colobus Piliocolobus waldroni of southern Ghana and southeastern Côte d’Ivoire was last reliably recorded in 1978, while the Mount Kenya potto Perodicticus ibeanus stockleyi is only known from a museum specimen collected in 1938.

In our recent publication (De Jong, Y.A. & Butynski, T.M. 2021. Is the Southern Patas Monkey Erythrocebus baumstarki Africa’s Next Primate Extinction? Reassessing Taxonomy, Distribution, Abundance, and Conservation. American Journal of Primatology, e23316) we assess the historic geographic distribution of the southern patas monkey and give evidence for its former occurrence in Kenya. We present estimates of the current distribution and population size, review the threats, and express our concern for its continued survival. We conclude with suggestions for conservation actions, including research. The objective of this article is to bring attention to the plight of this poorly known species, thereby promoting its long-term conservation.