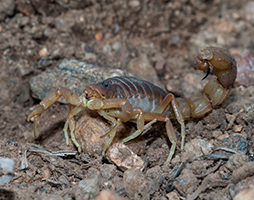 Searches for scorpions (order Scorpiones) on Lolldaiga Hills Ranch, central Kenya, (www.lolldaiga.com) were undertaken on 13 evenings between 15 August and 25 September 2017. Forty-one sites (Figure 1) were searched, each for 20 minutes, by two or three people. Total search time was 32 person hours. 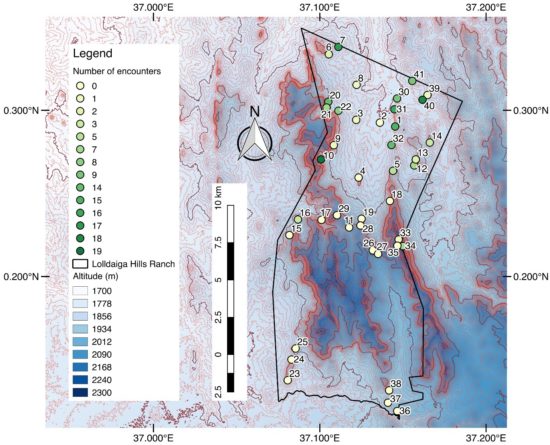 Figure 1. Forty-one sites on Lolldaiga Hills Ranch, Kenya, were searched for scorpions between 15 August and 25 September 2017. The upper legend indicates the number of scorpions (all species combined) that were encountered at each site. Map by Harry Wells.

Scorpions are most active at night. They are most readily found by exploiting a unique feature of scorpion anatomy; the exoskeleton fluoresces blueish or greenish (Figure 2) under ultraviolet light.

Three species of scorpion were found among the 180 individuals encountered: Parabuthus pallidus, Hottentotta trilineatus, Uroplectes fischeri. All three species are in the Family Buthidae and all are readily distinguished in-the-field from one another. The overall encounter rate was 5.6 scorpions/hour.

Parabuthus pallidus (Figures 2 & 3) is readily identified by a relative lack of distinctive colouration and markings, being reddish-yellow both on the back and tail with pale yellow appendages. Subaculear teeth are absent on the telson (= ‘venom bulb’; Figure 4). The tail is thick. The telson is thick and prominent (indicative of active use of the tail and high potency of the venom). This species exhibits far greater variation in terms of body dimensions than the other two species of scorpion known for Lolldaiga. The largest individual weighed 3.61 g and had a total length (= head + body + tail + telson + stinger) of 70.3 mm. This individual was feeding on another scorpion when encountered. Parabuthus pallidus was the most frequently encountered species of scorpion on Lolldaiga (95 individuals; 3.0 individuals/hour). This species was most common in the North Valley (Figure 1) where it favours rocky areas. Parabuthus pallidus was found within a narrow altitudinal range (1821–1947 m asl; Figure 5). 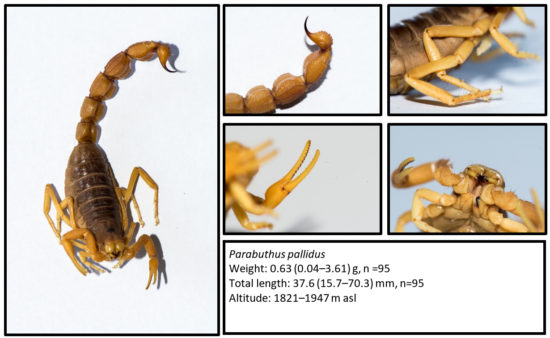 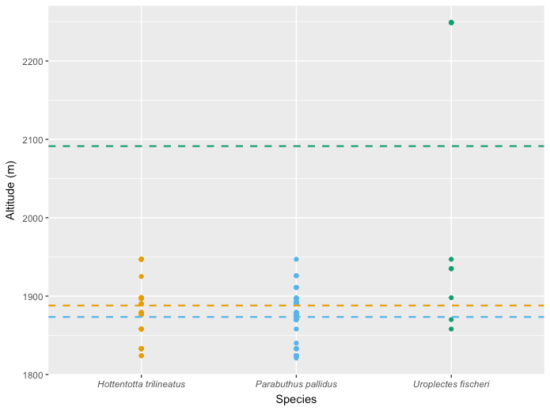 Hottentotta trilineatus (Figure 6) is not the most stunning scorpion in terms of dimensions, but it is visually remarkable with three distinctive dorsal lines (to which it owes its name). This species has the broadest (and likely strongest) pincers of Lolldaiga’s scorpions. Mean pincer (= ‘pedipalp’ = ‘chela’) width was 1.6 mm, while that for P. pallidus and U. fischeri was 1.4 mm and 1.3 mm, respectively. Hottentotta trilineatus is probably the second most common species of scorpion on Lolldaiga with 70 individuals encountered (2.2 individuals/hour). This scorpion lives in similar habitats to P. pallidus and has about the same altitudinal range (Figure 5). 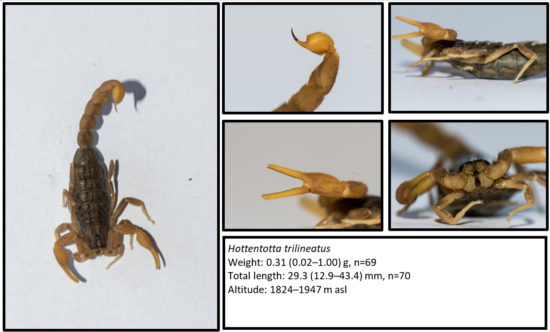 Uroplectes fischeri (Figure 7) is readily distinguished by the prominent blueish-black pincers, head, thorax, abdomen, fifth metasomal segment, and telson, a ventral stripe, and a subaculear tooth on the telson. With a mean weight of 0.24 g, U. fischeri is the lightest of the scorpion species known for Lolldaiga. Despite this, with a mean total length of 32.8 mm, it is slightly longer than H. trilineatus (29.3 mm). Uroplectes fischeri was, by far, the scorpion least often encountered on Lolldaiga (15 individuals; 0.5 individuals/hour). This species was encountered over a greater altitudinal range (1858–2249 m asl) and at a higher altitude on Lolldaiga than either P. pallidus or H. trilineatus (Figure 5). The majority of encounters were >1900 m asl (mean 2091 m asl).

Only three species of scorpion were found among the 180 individual encountered on Lolldaiga Hills Ranch. Additional searchers are required to determine which other species of scorpion, if any, are present. In particularly, searches should be conducted during the driest months (i.e., January–February) and in the several unsearched, or little-searched, microhabitats (e.g., kopjes, rock shelters, caves, buildings). 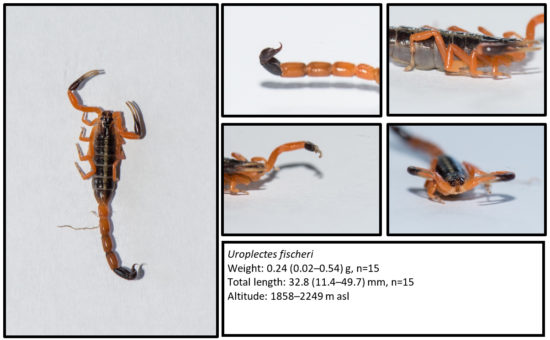