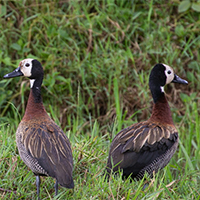 Five species have been added to the Lolldaiga Hills Ranch Bird List since May 2019. These species were encountered by Gerhard Nicholaus, Gudrun Galetz and Tom Butynski. The list now stands at 419 species.

Here are the five species:

The up-dated version of Birds of Lolldaiga Hills Ranch can be downloaded here.